Finding the Audience That’s Looking for “Praying the Hours” (pt. 2) 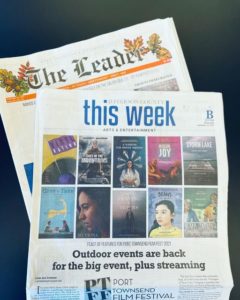 Months ago, just as we finished “final cut” of Praying the Hours, I wrote about anticipating the process of finding its audience. Right now, as this post is being written, Praying the Hours is part of the 2021 Port Townsend Film Festival’s virtual program. “Virtual” is a key word in this case, as Director Janette Force explained that programming an epic-length film is really only possible when people can watch it online at their convenience. In-person festival schedules are molded, more or less, to films in ranges of 4-15 minutes (shorts) and 60-120 minutes (features). Praying the Hours, at 3:08:26, requires a whole evening at a venue that could otherwise accommodate two screening blocks and twice as many viewers. The same is true at theaters for whom the loss of a second block could represent the night’s profit. So, the pressure for a film to fit within expected lengths by vendors and audiences alike, is understandably very great. The film itself isn’t constrained by these concerns of course, and many stories don’t fit in convenient boxes.

We knew this when we allowed story rather than marketing to define the length of our final cut. We knew that festivals and distributors might pass, and that even viewers might have a negative knee-jerk reaction. One friend urged me to cut it down under two hours—without having seen it—saying that it was just too much to ask of audiences. I did a quick google search and the first article to appear was “The 95 Best Films Over Three Hours.” Most directors that my friend and I admire had at least one if not more films on the list. (They were also all men, but that’s another blogpost.)

PTFF is the only festival out of nearly 20 submissions into which our film has been accepted. Though that stings, it’s also not a surprise. Burning Heart Productions has had great reception by festivals in the past, usually being accepted by well over the average of success—with each of them winning multiple awards. We’re also used to the fact that when a film is rejected there are no reasons given, except that the festival 1) had a great burden of films to watch, 2) that they are very sorry to have to make this difficult decision and 3) eager to say that it is not a reflection on the value of the film. You know, standard rejection language. (I’ve had to write rejection letters myself and they are hard.)

When we did receive feedback it was concise (and sometimes harsh): we didn’t program it because of the length. Which is a bit different than saying “because it is too long.” The latter is what one reviewer meant when he wrote: “it could be easily cut by 90 minutes.” That reminds me of the sign outside a coffee shop reading: “Come in and try the worst coffee one woman on Tripadvisor has had in her life.” Everyone’s a critic.

And then, on the other hand, are the people like the woman who wrote, “the film was able to sit with me for hours with my pain and questions as no one else has been able to do.” Or the man who, after three viewings, said, “I have no idea how you have managed to combine despair, hope, love, faith, redemption into each story, but you did. It snuck up on me gently, and then wham.” The ex-film festival director who said, “I don’t know that I have ever seen something so personal and alive as your film…[or] been as moved as I was by it.” Or the distribution executive who wrote, “I am wrecked. Profoundly and utterly wrecked. And it’s wonderful.” Or the artist who said, “such a powerful film. So poignant, so clear and uplifting and sad and joyful and painful and strong and weak. So much like life, like death, like soaring and sinking.” Reactions to the beautiful cinematography, the haunting score, the honest performances are uniformly glowing. 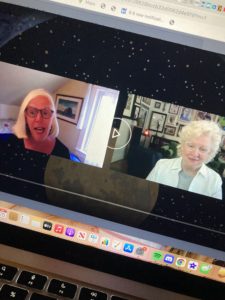 So where does that leave Praying the Hours? In the unenviable position of having a very clear resonance with people who cannot be aggregated into an “audience” to which we can market; people who are looking for it whether they realize it or not—even people who think they hate films like this. How does a film find them? That’s part of what makes this release interesting. Not having to earn anything, make anyone’s career, or pay off any debts makes Praying the Hours another rarity for a film: it can find its life in whatever surprising places it may be welcomed.

Which leads me back to the welcome of PTFF and Janette Force. We had a vibrant conversation over zoom that premiered with the film last week. This is her last year directing a festival that has built a reputation for being supportive and respectful of artists and unafraid to take risks. Bless you Janette and PTFF for making a place for our unconventional film. We hope it gives your audiences something as fine as you have given us over the years.

*This Just In: Thank you Kerry, Suzie, Dorothy, Dave, and Dianna for your contributions to the release of Praying the Hours. All of you, in different ways, have contributed more than once to the encouragement and resources of this crazy film’s release. Thank you for keeping the faith. (If you want to see the film or receive updates, write to info@burningheartproductions.com. To contribute to its release, go here.)