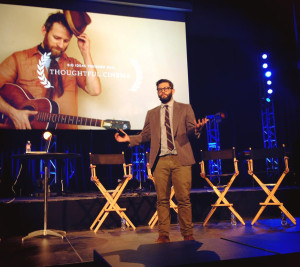 Evan Rosa, of the CCCA’s series on Thoughtful Cinema, introduced an early screening of the “Hour of None,” from Praying the Hours.

The release of any film is a long-term campaign. When I was a young filmmaker, I thought the finish line was just getting the film done—as if it would magically find an audience for itself just by existing. Now I know that it requires loads of research, knowledge about existing channels through which films are distributed, an acute understanding of the film and the audiences likely to understand or appreciate it, the skills to communicate that, and the energy (and patience) to go the distance. It’s a lot. It explains why filmmakers hire others to do it for them or simply fling their hard work into streams that exist already, hoping that they will survive the crush of the crowd to be rescued and promoted by kind souls.

Praying the Hours doesn’t fit into established independent film channels. It bucks all kinds of filmmaking conventions: it’s a philosophical film in the tradition of magic realism, it’s three hours long, it is about something (in addition to the story), it doesn’t follow a recognizable three-act structure, and it requires the audience to do something other than let it wash over them. It requires attention. That means an even more intuitive and unconventional release is necessary. More strategy. More innovation. More courage. More faith.

I have a gut instinct that the film will find its feet outside of the United States, so I am looking for unconventional avenues (in addition to film festivals). I am also looking for small groups in the U.S. who might “beta test” viewings and tell me how they might use it. I think the film is best watched straight through, however, it can easily be divided into two 90-minute, three 1-hour, or nine 20-minute increments.

Here are the kind of unconventional ideas already being pitched to me: a film professor who wants to include it in his syllabus alongside films like Malick’s Tree of Life and Kieslowski’s Dekalog; a faith leader who wants to create a class on the divine office using the film as his “text”; a PhD student who wants to watch and discuss with a handful of colleagues; a therapist who wants to program it in spiritual retreats she leads.

I (fondly) imagine a panel of an imam, a priest, and a rabbi sharing about their faith traditions’ observance of the hours of prayer; a Polish independent film group discussing its place in films of 3+ hours (there are such lists—with few or no women directors on them); a weekend arts conference in Prague breaking up viewing into sessions—or scheduling a marathon midnight screening for brave night owls; of monastic practitioners of the daily office in Orvieto learning something new about their prayers from a filmmaker (as I have learned from them).

This is a film intended to pass the parking lot test—when you are still thinking and talking about a film long after a screening is over. Burning Heart Production films prompt Q&As, panels, conferences, and events to do precisely this: generate conversation. This film, among the others that have had long after-lives, may be the pinnacle of that, I think. “I think”—there’s the rub. I don’t know. I’m reading, listening, testing, and watching for the path to become clear. I have many advisors in this, but the path is still fog and walking it requires faith that the unpredictable will occur (and that the catastrophizing imagination will be hushed).

This film is paid for, by those who made it and those who supported it along the way. It’s not a pack mule—it doesn’t have to earn any money, make anyone’s reputation, repay any debts, garner good reviews. Its “distribution” is simply to be released and find its way where it might be useful. An image occurred to me, of standing at the top of a high hill and pouring water from a pitcher. The water, as you would guess, ran in little rivulets along the paths of least resistance downhill, greening up whatever ground it sank into. That’s the idea. Pour it out. See where it goes. This could be interesting.—Lauralee Farrer, director