You Have No Events Scheduled Today 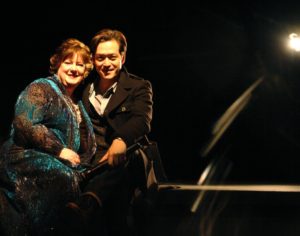 Yesterday and today my Google calendar informed me that I had no events scheduled, yet they were two very different days: the first so complicated it was impossible to record all that had to be done; and the second with a single chore—go home.

Last night around 11:00 p.m. we shot the “martini” (or final shot) of “Compline” for the Praying the Hours film. Fittingly, it was an image of the Compline character standing on the stage of her dreams. From the time we started arriving in Indiana four weeks ago until last night, all efforts to bring “Compline” to life are captured on our hard drives and shuttles.

For now, the most demanding stage of one of our stories is done. The material we’ve shot will enter the next stage of creation with senior editor Greg King to whom we are giving some beautiful imagery, performances, sounds, and experiences made by a very generous community of neighbors and students. We had our first experience of working together as a team within PTH, learned a lot, had a great time, and left fulfilled and exhausted. At around 2 a.m. this morning cinematographer Jordan McMahon said, “we’re gonna miss this in a few days.” And we will.

Independent filmmaking is like white-water rafting—you can spend months getting the right gear together and making meticulous plans only to jump into rapids that are outside your control. Two kinds of skills are required then, the ability to plan strategically and thoroughly, and the ability to roll with the elements. It’s rare to find both of those characteristics, but we saw it in abundance throughout the shoot. There were plenty of McGyver’d shots involving pyrex trays, china balls, pool lights, and jerry-rigged lenses and batteries for a camera so new that all the accessories weren’t even available for basic functioning.

We had annoyances and heart-stopping misfortunes, things that irritated and things that threatened to shut us down—like a main actor delayed a week by bronchitis, a rented lens that drifted out of focus and ruined days of principal footage, sick crew members, broken heater systems, and most of all, wildly shifting weather. From 50 degrees down to 10, we had rain, sleet, snow, and sun. Beautiful vistas that are great for tourists but nightmares for film continuity.

Still, even those situations were redeemed beyond anything we might have imagined: lost footage was reshot with stronger rewrites, a week’s delay of shooting meant more time to adjust to the learning quirks of new equipment, shooting all eventualities of weather meant terrific production value, and our needs activated an amazing generosity and hospitality in the community.

We leapt into the rapids, threw our urgent requests toward heaven (with the help of a great many of our friends and family), and then our untamed God did his own thing. That’s unnerving if you have plans that require you to maintain control, but for those who worship a God who is bigger than they are, the result can be something transcendent beyond anyone to control or even explain. Which is probably why, even now, the story team is writing and the production team planning the next and the next and the next. 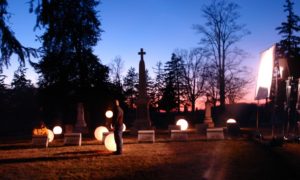