When You Finally Finish Something that Is Never Done

Last Saturday we pressed “print” on the final stage of the feature film Praying the Hours. Sound Designer Scott Weber, Composer Lauren Meares, Editor Patrick O’Neil Duff, and I spent 11 hours in the loveliest new studio at Smart Sound Post in Glendale, with the best treats. Sunday I was like a person after a concussion: I kept trying to get my mind around the fact that Praying the Hours is finally done. A project on which I have worked in bits and pieces for nearly two decades—a film on which hundreds of people have volunteered or worked-for-less over the years—has finally come to fruition. But even though we called it last Saturday, since then we’ve placed final titles, exported, QC’d, uploaded, and QC’d again. It rests now on Vimeo where manager Simon D. gifted us a temporary upgrade for the massive 68GB necessary to upload a 3-hour, 4K film.  This represents days of more work: the export alone took over 7 hours (thank you, Patrick). All this is work that must be done after you’re finished. But you have to call it some time. You go crazy if you don’t. 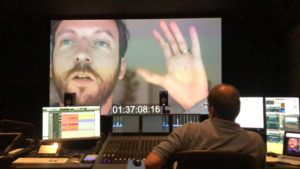 This is familiar territory to any artist—especially filmmakers. The work of your own mind and heart is forever yours to shepherd. There’s always something more you need to do for it, with it, because of it. So it’s more accurate to say that Praying the Hours has reached the end of one stage and the beginning of the next: release. The success of it will not be measured in the same way most films are: not by money made or audience views. No. A three-hour window onto time and prayer isn’t for everyone nor is it even for every time. It’s the opposite of a mindless escape led by “Liam Neeson with a gun” as friend Andrew Neel put it. Its themes make demands on the viewer who might need to watch at their own time and pace.

Abraham Heschel says faith lives in an architecture built in time rather than physical space, that Sabbaths in sacred time are equivalent to great cathedrals. The discipline of praying the hours is a way to remember the presence of God, to break the hold of chronos time and enter the grace of kairos time instead. The movie Praying the Hours is a window into that “grace time” through which viewers might simply observe or through which they may climb into a new 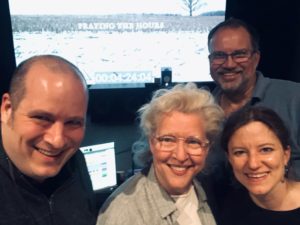 relationship with time. All the years of our labor are really just to facilitate this journey that playwright Christopher Fry called, “exploration into God.” Also something that is, mercifully, never finished.
—Lauralee Farrer, Director

(to learn more about the film Praying the Hours or to receive updates on when or where it can be viewed, sign up at www.burningheartproductions.com or on the Burning Heart Productions Facebook page.)