The team behind Praying the Hours often comments that by the time we finish all of our shoots we will run like a well-oiled machine. Until then, we learn the lesson of courage required by any art form: keep going. More time, SO MUCH MORE TIME, is spent on logistics, planning, organizing, preparing, reorganizing, paying and strategizing than on storytelling. The periodic despair over not being able to give the material the creative attention it demands washes over me almost daily now. These are the “first- world” challenges that escalate during the days leading up to a shoot.

The story of “Compline” (shot in Indiana and portrayed by Marcia Whitehead) is being cut by Greg King. “None” (shot in Echo Park and portrayed by Aaron Paul Ballard) is being sync’d and will be cut in May by Patrick Duff. “Terce” is our current project, portrayed by Elizabeth Montgomery. Today we spent half a day in our primary location talking about lights, production design, shot lists, cast members, and babies. 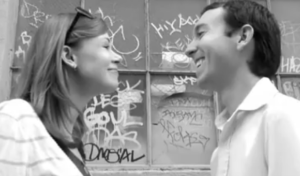 We talked about babies because the DP for this hour, Martina Nagel, has a baby son who was there with us while we worked. Our lead actor, Elizabeth Montgomery, has an even younger baby girl who will be, in some ways, the off-screen subject of our narrative. While we were working, a text from production friend Tony Hale came saying he was at the hospital with Beth Castle who gave birth today—two months early—to a baby boy. Our minds continually drifted over to the image of her and her husband Greg, keeping vigil by the neonatal intensive care unit.

The story of Terce has many layers, but two of them touch on the birth of a vulnerable little one and the ways in which Terce never really grew out of that archetypal vulnerability. So again, the art we were planning mimicked the lives we were living. We need each other. That’s the reality that our character Terce must learn to embrace: the difficulty of asking for help and the poison of thinking that she (or anyone else) can survive without it.

At the Ashland Independent Film Festival last weekend, producer Tamara McMahon, writer Jonathan Foster and I were privileged to watch our film Not That Funny in front of an audience for the first time. We met Seattle writer/director and media personality Warren Etheredge (of The Warren Report). Today, in an e-mail exchange about Praying the Hours, he wrote, “I am always amazed/saddened, that more filmmakers don’t attempt spiritual material like this. Kudos to you for pursuing such an unorthodox project with such obvious personal resonance. It is that level of passion and commitment and vision that forms the soul of all great art.” 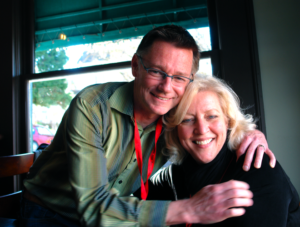 It was a generous note, and his phrase, “obvious personal resonance” touched me today, especially. The themes of this project keep resonating while also striking the gong anew. Each hour holds its own mysterious stories, in addition to the ones we have planned. This is both the challenge, and the transcendence, of the work.

And while we are at that work, welcome to the world Fletcher Castle. We are praying the hours today, for you.
Follow us on Twitter @praythehours as we shift, this next week, from tweeting None (3 p.m.) to Terce (10 a.m.).