The Hour of Prime: The day is lit. Choose your course.

Artist Lori Fox imagines the Hour of Prime in watercolor

This is the third in a series of eight reflections on the Hours of prayer, focusing on Prime, the start of work (for many around 8 a.m.). This series celebrates the release of the Praying the Hours soundtrack by Lolo Meares. An excerpt from the soundtrack starts the post so that you can have her sonic imagination of the drumbeat of this Hour in your mind as you read. (A link to the album can be found at the bottom of this essay, along with a link to the book Praying the Hours in Ordinary Life from which the essay comes.)

Prime is the first hour of the day between the dawn of Lauds and the midmorning Hour of Terce. The day has fully emerged from the night, and the movement of the sun is discernable. This light has intention, taking, as it rises, a long slow look at a fresh Eden.

For many, this is the hour when one is finally fully awake and charged, even if one has been stumbling around out of bed for some time. To stop and pray at this time is to set the course of a day that will go awry otherwise, possibly setting in motion a chain of days without purpose.

Henry David Thoreau warned, “Most men lead lives of quiet desperation and go to the grave with the song still in them.” Such desperate lives do not come in a package, but are built day by day—a long progression toward meaning or toward emptiness. Greek myths tell of Prime hours marked by lives of interminable, pointless repetition. Cursed to roll a huge boulder up a hill only to watch it roll back down, Sisyphus repeats his drudgery throughout eternity. The lot of Prometheus is more tyrannical, because it threatens endlessly refreshed suffering: while Prometheus is bound to a rock, he is eviscerated each day by a great eagle, only to heal through the night. The death and resurrection of Christ turns this mockery upside down: each day is a new possibility for restoration to the image of God in which we were created.

The soundtrack of Prime is the drumming of our hearts. The hour knows no bounds. It is long enough from night to deny its threat, and to allow belief in our own immortality. So, with bravado more than courage, we attempt things that appear overambitious as the day wears on. Yet great vision can be discerned, and great things set in motion at this hour. If dawn is the epiphany of a nascent idea, then Prime is that thought in its fruition, with all the fervor that accompanies big plans. The threat of this hour is not so much that one will be reckless, but rather that one will spend the energy unique to this hour on inadequate or dissipated goals. The emphasis of “choose your course” is not just on choosing the best path ahead, but on the importance of stopping to choose in the first place.

How does one, at arguably the least informed stage of one’s adulthood, make such crucial choices? The first verse of Psalm 139 gives a strategic answer: “O Lord, you have searched me and known me.” One is promised the Holy Spirit not so much as Comforter here, but as constant, omniscient Advisor. Along with the power to do comes the infectious confidence in our own grandeur and resistance to intrusion. Still, the goal is not a controlled life that we might conceive, but an abundant life only God can imagine. The result of ignoring God’s higher thoughts for our lives produces the converse of enthusiasm—a hypocritical and free-floating anger at God that our lives are not turning out as we planned.

The gift of this hour is its infinite repetition, and its value is determined by whether we seize the day or are bored by its endless familiarity. Prayers during Prime, no matter how brief—perhaps prayed during the commute toward work—ought to be for God’s direction, to listen for the whisper that Isaiah promises in 30:21 “And when you turn to the right or when you turn to the left, your ears shall hear a word behind you, saying, ‘This is the way; walk in it.’”

It was the conviction of the early Benedictines that just to stop for a moment was enough to reorder the course of one’s day, and to make each movement of the day one step in a long unbroken line of prayer. One begins to understand the possibility of prayer without ceasing, when it is not the actions that one changes but rather the intention behind those actions. Artist Ed Knippers was asked by his students if it is possible to love work too much. “No,” he replied, “but it is possible to love God too little.” 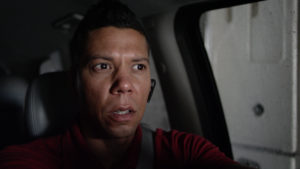 Prime (Ramsey Robinson), driven by the drumbeat of the day, reflects in a quiet moment on choices that will affect the rest of his life.

The hour strikes; its clear, metallic gong
rings inside of me. My senses resonate.

I realize, I can,
and I take hold of and sculpt the coming day.

Nothing in my life has ever been finished
without me first imagining it.
All becoming stands still without me.

My visions are ripe, and like a bride one has chosen
every man receives what he’s desired.
No idea is too small for me, I love it no matter what.
I paint it on a background of gold,
make it large and hold it high,
even though I don’t know yet, whose soul it will excite.

—Rainer Maria Rilke, The Book of Hours, I, I
translated by Martina Nagel 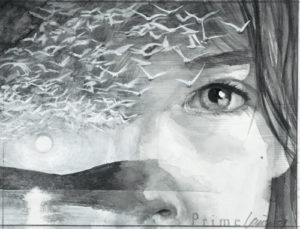 Excerpt on Prime from Praying the Hours in Ordinary Life by Lauralee Farrer and Clayton J. Schmit, Wipf and Stock, 2010, used with permission and found here. Excerpt from the album on Prime, from the Praying the Hours soundtrack by Lolo Meares—with artwork by Lori Fox—can be freely streamed or purchased here.

*This Just In: Thank you Dianna, for your belief in the value of this unconventional project, and your faithful, ongoing support. We’ve walked a long road together. (If you want to see the film or receive updates, write to info@burningheartproductions.com. To contribute to its release, go here.)