The Best Stories Are In the End Credits

The movie Praying the Hours, finished just a week or so ago, has hundreds of names listed in the end credits. Those names reflect the scores of people and resources it takes to make a film. Both in front of and behind the camera, it requires people who are willing to show up ready to wait or work, brave the cold or the heat, be happy or sad—on cue. And then, of course, there are those deep behind the scenes (like some now reading whose names are also in the end credits) who have prayed and encouraged and given. 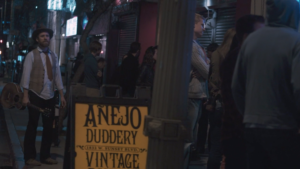 None (Aaron Paul Ballard) arrives at the Duddery for The Parson Red Heads pop-up concert in the Hour of None.

Nearly a hundred friends gave an evening to form a crowd of concert goers at the Añejo Duddery for a (staged) pop-up concert by The Parson Red Heads—fronted by The Meares and Andy Creighton. That crowd gave a cumulative 400 hours of time to result in only a few minutes on screen. Their names move by at a clip in the end credits, but each one was necessary to make the moment real. They brought their own experiences to that concert with them, and willingly set them aside for the sake of the film. Some of their days were filled with babysitters hired, hard test results received, love declared, nerves faced, feet tired, job anxieties, parking tickets, growling stomachs—but they arrived eager for the bright recognition of friends gathered for good music. The friends and the music were real, and, therefore, so were the emotions we captured.

In those credits is a section we called “Women Who Made It Happen.” There are six names listed that represent a thousand stories. They are a faithful few, all women it happens, who gave regularly over years of time to help strengthen the project. They are not the only ones who gave, make no mistake, but they gave so much for so long and so faithfully that they deserve special mention. 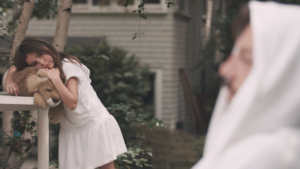 The Fearless Girl (Olivia Allchin) and Sext (David P. Frere) face off in the Hour of Sext.

A young actor from that group, after finishing production on one of our stories, asked her father if she could give 10% from her paychecks for commercial work to Praying the Hours. She explained that it was, to her mind, a work of God in the world. Touched, her father said yes. Though she was a girl, her perspective showed wisdom beyond her years so we thought it fair to include her in the category of Women Who Made It Happen. Her donations moved us forward for a time, but we were fueled by the inspiration of her belief long afterward.—Lauralee Farrer, Director 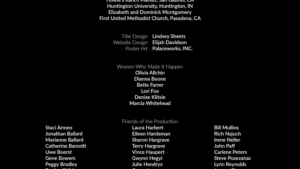 Women Who Made It Happen

(if you want to contribute to the costs of releasing Praying the Hours, you can do so here.)