The beginning of production 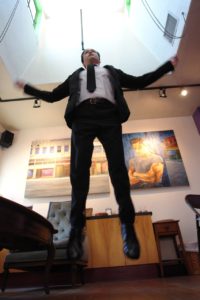 Since I started writing the script for Praying the Hours nearly a decade ago, it has been a long and emotional ride to January 2012. During that journey, loved ones have been born and loved ones have died—including Matthew Diederich, whose last words to me were, “when are we going to make Praying the Hours?” Shortly after that conversation Matthew was killed, and the heart of our current feature script is based on our imagination of his journey from this life into eternity.

Many still and moving frames have been shot in attempts to embody time and prayer into characters. Untold time has been spent in design and camera planning; and words, words and more words have been written and passionately spoken and prayed. Countless hours pursuing production financing have been invested by producers who never lost their passion for the story, but weren’t able to secure the funds and filmmakers who started the journey with us but are unable to continue.

Now—at our own risks—the current team moves forward with faith in the project’s value and our determination to bring it to fruition with or without financing. As our friend Dottie Davison says, we are counting on a “budget of God’s love” to carry us to the mysterious end.

In January, we will have two Red® Scarlet™ cameras and a fantastic team of filmmaker-friends who will travel to Huntington, Indiana, under the supervision of segment producers Matt Webb and Lance Clark, where we will complete the first of ten shoots, and launch on the long road to capturing this ambitious project for the screen.

As of the end of 2011, our leads are cast, our cameras purchased, interns being gathered, our production team organized, and our stories in development. We push forward knowing that nothing gets achieved without momentum, and also knowing that we are throwing ourselves into a fray that we have all, in one way or another, felt called to engage. We have made our plans—now we see what epiphanies will happen along the way.

Thank you for your interest and your company. Here we go.