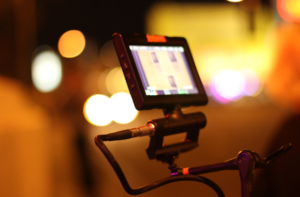 The “found moment” is our shorthand for authentic moments that inspire a film but cost a fortune to orchestrate. Here’s an absurd example (except that it happened in the movie Ray): A common hummingbird flies in your open window and buzzes there, then zips out. Your heart pounds as if it were an angelic visitation. You write, of a person who has an epiphany, “a hummingbird flies in her window.” Later, producers have to organize a scene that requires a hummingbird wrangler or expensive CGI. To make an even sillier point, at the time of its release, Titanic was the most expensive movie ever made, while the sinking of the Titanic happened for free. What cost so much was making it happen on cue. 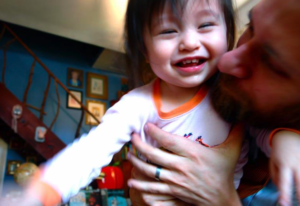 On a far smaller continuum of epiphany to disaster, independent filmmakers try to manufacture the organic moment just like big budget filmmakers do. On PTH, we are using a shooting style that is half-documentary and half-narrative to capture the truthful moment, much as John Carney did so beautifully in the movie Once.

We write a story, built of bones and filled in with dialogue and action—instructions of the kind of thing to look for and to film. When actors are cast and locations secured, we rewrite around the reality in order to accomplish the same ends as the first script, but in a more organic manner. When the script for “None” called for a baby to be sleeping and she was irrevocably wide awake instead, we rewrote a scene that required a laughing baby. 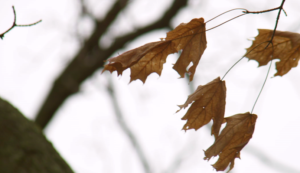 Before the “None” shoot I showed DP Abraham Martinez the locations in advance. He said, “these locations are perfect for the script!” Of course they are, I wrote to them after they were secured. We write/film/edit a story from pieces of real life, relying on our ability to see the narrative in the circumstances surrounding us. I told one cinematographer: “God will show up. It’s your job to get it on camera.” This requirement to be present is unnerving to some and liberating to others. To my mind, cinematographer Jordan McMahon is the prince of the found moment. He knows how to compose and frame a shot, but he also has a sixth sense of when something is about to happen—even if it’s stillness—that speaks to the moment the scene calls for.

While shooting Compline in Indiana, our found moments were created by things like snowfall, the availability of an empty house, an unstable mousetrap covered in peanut butter. Marcia recounts:

During one of the scenes it was my job to pick up a mousetrap and place it in one of the kitchen cupboards. We filmed it enough for me to let my guard down and realize that mousetraps are nothing to be afraid of. And then, while scooting the trap to the center of the shelf, it snapped shut, flinging peanut butter in every direction. I have no doubt my screaming was heard in Canada. 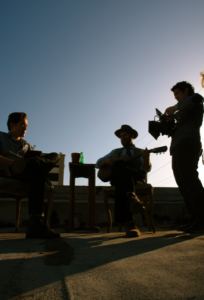 That was a simple—and hysterical—found moment that was easy to catch. Recently, as we shot the story of “None,” there were sober, winsome, sad, pensive, and charming moments, such as a moving bus throwing a maze of shadows across the frame shop (seen by Abe) or a picture frame reflecting the expression of the framer as he works (seen by Jordan). In the script I wrote the line of dialogue: “I just don’t think about it.” After that, on a location scout, I saw a small framed image that had written on the corner of the canvas, “I try not to think about it.” That was eerie. And now I realize, often that’s what it takes: stop thinking, and see.