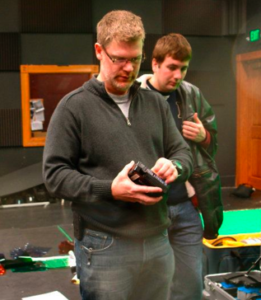 In the fall of 2010, Praying the Hours producer Matt Webb and I began a series of conversations that began with “What if…” I’m sure you have all started out a few meaningful talks that way and in the end you are usually left asking more “what if” questions than discovering answers. Matt and I soon found that a few of our “what ifs” turned into “could we?” and then graduated to “how can?” and finally “when will…”.

I love dreaming and casting vision for our digital media arts film program at Huntington University and one of my early dreams for the program consisted of networking with independent filmmakers and fellow believers who have a passion for storytelling. Matt is a 1998 graduate of Huntington University, and I have had the privilege of staying connected to him and his journey over the years. When I heard that he was studying film in the Los Angeles area I really started to pray about how God would someday cross our paths. It wasn’t long before we started those “what if” chats.

Most of you probably have never heard of Huntington University. It is a small private liberal arts college nestled in the northeastern part of rural Indiana. I have had the privilege of teaching at HU since 1993 and have been truly blessed to have some outstanding students come through our program. I play the role of executive producer on several student films each year. There is great value in steering students through the production process, yet I always knew in my heart that to really stretch our student academically and professionally we needed to take it to the next level and work with professional filmmakers. Hence, Matt’s connections and his passion for our program led him to teach a film class in January of 2011. Little did I know how much of an impact this would have on me and our students because during those few weeks of his class Matt asked director Lauralee Farrer and a host of other indie filmmakers to venture out to guest speak here in Huntington. I look back now and see how God was laying the tracks for the filming part of Praying The Hours.

Fast forward 12 months and we started principal photography in January of this year. 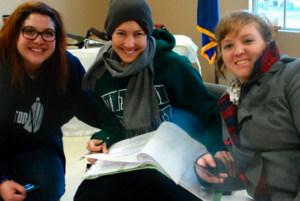 What an amazing turn of events. As a segment producer on this film my main job was to help manage the eleven students that signed up to serve as production assistants. The typical “J-term” class meets two hours a day for a few weeks before the spring semester kicks in. Our students knew that this was not going to be any ordinary class and that we would be filming several hours a day and in many cases late at night. I think taking risks is a huge part of success and I know that this was a very big risk for PTH’s production crew and our program. My prayer was that our students could really contribute to the filmic process in meaningful ways and that our students and campus could provide the film crew the equipment and location needs that were required by the script.

Lauralee flew out a few weeks before Christmas to scout things out and to get a real sense of the various locations she wanted to film in and to cast some of the principal parts for the Compline segment. I was fortunate enough to get to spend some very valuable time with her during those weeks and was able to peer inside her creative genius head on how independent film can work in an organic way. Lauralee and the entire film crew that came from Los Angeles adhere to a filmmaking code known as the Kinema Commonwealth. The basics of their manifesto center on three community values: 1. Respect for the individual filmmaker; 2. Respect for the community in which you are filming; and 3. respect for the artistic integrity of the film project at hand. I watched and engaged with the crew from LA closely over the four weeks of filming and was blown away by how everyone not only adhered to these principles but practiced them in very real and meaningful ways. Despite long hours, basic living conditions and working with our student production assistants the PTH crew never complained. Matt and I wondered if it could really work, and in the end I know it did. I’ve not seen any of the footage but I have had several post conversations with our students who now have a deeper and richer exposure to filmmakers that love their craft and who show love for those around them. Now when I talk to Matt our conversations usually end with “What’s next.”