Prayers for a Holy Death

A strange thing happened on our first day of principal photography for “None.” The script called for a woman to interrupt the main character None (Aaron Paul Ballard) as he is trying to write a song. She urges him to open his frame shop early because of a framing emergency.

Because framing “emergencies” are hard to justify, we had concocted this idea that she wanted to frame a rock-n-roll poster for her boyfriend’s birthday party that night.
A long and equally strange series of events led me to send a Facebook message to director Michelle Steffes the night before and ask if she might be available to play that customer. She wrote back, “do you want me to act? Or to help you find someone?” I knew for certain I wanted her to play the customer, but I couldn’t explain why. So I didn’t. A great sport (and a good actress!) she said she would give us her day, but that she had one chore she had to take care of: a framing emergency. Imagine her surprise to be called to the set of a functioning frame shop. 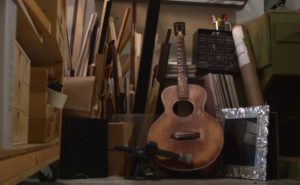 Finally, I realized why: the hour of None is when monks go into their cells alone and their prayers include the petition for a “holy death.” That means they face the disappointments that accompany the “none” season of their lives, and ask God to sanctify their remaining years. I asked: will you let us frame this photo in the film? She called her boyfriend, and he said yes.

That found moment shifted the tone of the whole scene. When her character returned to pick up the frame job, she was invited to an impromptu Parson Red Heads concert that night, as a way of lightening what was sure to be a heavy evening. She asked what she owed for the framing job, and I told Aaron, “just tell her it’s on the house, and to ‘come back in happier times.’” So, Aaron said just that. And, in a case of life imitates art, he gave her the framing job he had just done, and he choked up on every take (and so did I). Later that evening, when None sees Michelle at the concert, there is a brief but very genuine moment of connection between them. We did not film what we planned, we filmed what we were given.

I do not know Michelle’s boyfriend, but I spent quite a bit of time with his father’s photograph that day, filming it and framing it, and—for my part—praying for him and for the family. It was a very rich and mysterious connection. Just the sort of thing one should expect from this particular hour of prayer. We asked permission of Joey (through Michelle) to tell this story, and he agreed, adding: His name was David. Rest in peace. 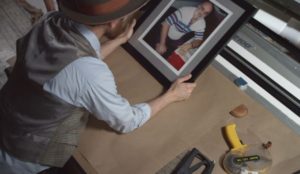