It Did Not Entertain Me. 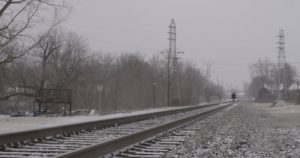 The Traveling Man walks far in the distance on his journey from this life to the next.

Two of my dear friends released huge film projects last week. Each of them were in  the news, each watching the numbers with their respective studios and each heaving a sigh of relief—then joy!—that something they’ve worked on for years has solidly hit its mark. I lived with each of them through those projects and it’s very satisfying to live through the success with them, too.

Last night a friend soberly asked me if she could give me her thoughts on Praying the Hours. She pulled a notebook out of her bag and set it next to her on the couch. She watched it three times, she started out saying. She’s sorry it took her so long, it’s just that she’s been so tired lately, and there’s been an unusual amount of drama in her life.  (Three times. That’s nine hours. I was already speechless. This friend is a busy professional.) I started to explain that I never expected her to…and she held up her hand to stop me. “Let me finish,” she asked.

The first two times, she watched late at night when she couldn’t sleep anyway and, she confessed, she felt a little lost. She recalled even asking me, after the second attempt, to explain what I was trying to do with the film, hoping it might make things easier. On that evening she recommended ways in which I might help people break the viewing up. Offer study guides. Screen in twenty-minute increments and discuss with others. “I get it,” I told her, “It’s not your fault…I just think it’s not for everyone.” Again, she held up her hand meaning, “there’s more.”

Two other friends watched a portion each, explaining that they were embarrassed to say they hadn’t watched it all. “It’s all good,” I say, honestly. Then they’ve commented on the part they did watch, how they felt about it—quoting some line or remarking on some action they reverberated with, sometimes weeks later. “I’m having one of those crushing months of work,” one director friend texted apologetically, “and am going to have to set aside three hours for the full film in July when I can focus and enjoy….” And then she said this, just as candidly, “but I watched [the Hour of] ‘None’ and was blown away. Incredibly gorgeous and moving. I had tears running down my face. It’s just…I definitely really empathize with the character—like I was watching with an ache in my chest. It’s a beautiful poem and I could not have loved it more.”

My notebook friend, the one on my couch last night, said that the third time she watched it “in the light of day” and, for some reason, she caught it like a boat catching the current. She watched all the way through in that sitting and it all stuck. She wanted to take notes, she couldn’t write fast enough. I was surprised at her insights, at how deeply she dove in, and the artifacts she brought to the surface with her, things we planted deep in the story. She had pages of notes about characters she hated, moments she loved, dialogue she is still thinking about, actions that reminded her of other people, stories that reminded her of herself, places she sobbed, places she got angry. “It did not entertain me,” she said. “It did not come and get me. I had to think the whole way through. I’m still thinking.” At first I didn’t say anything except how much I appreciated her for not giving up on something that was so difficult for her to access. She corrected me, “it’s beautiful. It’s not easy, but it’s something really…” she fished for words. Finally, she said, “I’d like for my brother to see it. Would that be okay?” (Yes, of course.)

My filmmaker friends and I are having two very different film-release experiences. Usually it’s the kiss of death if a film fails to grab its audience within the first few minutes. But there are many different kinds of films, some that make a splash and some that have a slow burn (and some that fizzle). You don’t know until it’s out there. Never have I worked so hard to give people permission not to watch or comment on one of my films. It’s okay, I get it—who’s got extra time or energy? Study guides are a cool thing—somebody else may do that. Somebody else may use Praying the Hours to spark discussion with a small group, plan a conference around showing it on a Saturday night, hold zoom discussions. I don’t do that part. I’m working on next stories. As I’ve said before, this film doesn’t have to accomplish anything, I just had to make it.

Still, I know something’s there. Story is both my gift and my craft. It’s what I have spent my life doing. I know when one reverberates. I don’t know who all it’s for, and I can’t tell anyone exactly how to access it—where the current is and how to get your boat into it—or even if you should try. The projects released by my two filmmaker friends each have depth and meaning in addition to being brightly entertaining. Each of them lasts for awhile with you, and each can teach you something. The difference is not that some films are fluff and others substantive. It’s more like some get delivered to your door and others you have to walk out into the desert to search for. That is as it should be: I’ve been on that walk into the desert, and Praying the Hours is what I brought back with me.

*This Just In: Thank you Michelle and Dave and Bruce for your contributions to the release of this film. Your generosity makes it possible for this project to find the light of day. Michelle, you charmingly referred to your donation as a “rental fee.” That would make it the most expensive movie ticket in history! Thank you. (If you want to contribute to the ongoing costs of releasing Praying the Hours, you can do so here. If you want to be added to a list for updates, go here and scroll down. If you want to watch the film, write to me at info@burningheartproductions.com for a link and password.)