If You Don’t Care Who Gets Credit 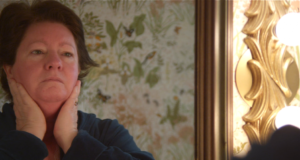 At the end of the day, Compline (Marcia Whitehead) looks back on an artistic life in obscurity and wonders what the purpose has been.

I have a favorite reality-check quote: “You can get a lot done if you don’t care who gets credit.” I had that reminder hanging on my office wall for many years: ironically, I don’t know who said it. It’s a challenging idea, but it kept my eyes on the prize of completing a project rather than worrying what others thought of me while I was completing it.

Here is a truth about filmmaking more accurate than fair: when your film works, you owe the credit to hundreds of people. When it doesn’t, it’s on you alone. That’s only one of the reasons it’s such a difficult endeavor, only one of the reasons why Director Alejandro Iñárritu said, “To make a film is easy, to make a good film is war, to make a very good film is a miracle.” A miracle? Really? To tell our stories, filmmakers have to believably recreate reality, so that audience eyes and ears and minds and hearts will agree to make believe with you. It takes an army of people, including some very talented professionals, to do that—so many, in fact, that end credits can seem to go on for miles. This is true for big budget films and for independent films alike.

Both approaches need people to pretend to be at a party, people to provide midnight snacks to crews working overtime, people to hold boom mics over their heads until their arms go numb, people to loan irreplaceable props, people willing to temporarily shut down their business locations or provide picture cars that sell something crucial about a character. Each of these reality-creating elements, and a thousand more for every frame, contribute to the believability of a scene and support the actors in their remarkable jobs of making the pretend real. If such dearly earned shots fail to tell the story they need to, the buck stops with the director. It’s her job to make sure, through the process of writing, casting, shooting, and editing, that the story is working.

Once that miracle occurs, though, you must balance that willingness not to get credit by being sure that others do. One way to do that is in the end credits that many viewers skip (often to the chagrin of the filmmaker). Another is by adding professional credits to the Internet Movie Database, or IMDb. Anyone intrepid enough to engage that system knows that it is arcane, wonky, super frustrating, and necessary: IMDb is where people check to see whether you are who you say you are as a filmmaker. And the list for Praying the Hours is looooooooonng—it took weeks just to get all the information submitted, approved, and loaded. (You can see it here, and if you notice anyone missing or incorrectly listed, please let me know.)

This balance of caring and not caring about credit is one of the battlegrounds for the artist’s soul. If someone else gets credit for your idea, is it still your idea? If you don’t get credit for your hard work, does that reflect on the value of your talent (not to mention your employability)? Is it nobler to labor in obscurity or in the public eye—or is that the wrong criteria altogether? These, and a thousand other questions like them, dog artists throughout our lives. As one of the characters in Praying the Hours tearfully says when she is told that her voice is a gift from God: “I don’t know what to do with that. I mean, what’s the point?”

What the long list of end credits and IMDB listings reminds me, ironically, is that “the point” actually goes far beyond getting or giving credit. Those credits remind me how many people gave (and are still giving) of time, money, energy, and love to release something thoughtful into the world, without asking what is in it for them. This gives a special kind of life to their talents and resources. Their generosity reaches way beyond the end credits, way beyond even their knowledge of their impact, because even memories of generosity have the power to encourage and give meaning. As the character Compline, played by Marcia Whitehead, observes in her story, “Some days, I am filled with hope beyond all common sense. I believe. Isn’t that ridiculous? I believe after all these years, there is a purpose to this life.”

*This Just In: Speaking of giving credit where it is due, imagine our gratitude to those who decided to throw some money in the pot for release expenses and covered all the costs for this season’s festival submissions! Looking at several of you already mentioned, and also Steve, Tod, Kathleen—what a grace! (If you want to contribute to the ongoing costs of releasing Praying the Hours, you can do so here.)