Calling at a Decent Hour

When we were in Indiana, early one morning before a day of shooting, I texted my friend Keri Tombazian to ask her to pray for me. I realized with horror that I had texted her at a little before 3 a.m. in Los Angeles (or at the hour of Vigils). Later, at a “decent” hour, I texted again to apologize. Typical of Keri, she replied: “don’t ever worry about that. My phone is on kairos time.”

Kairos, of course, is time that is filled with grace. Chronos time is the polar opposite, it is unforgiving, relentless, unstoppable. That’s the time we live by, mostly, with the exception of the transcendent kairos moment here and there. In a conversation with Tricia Harding the other day we were both bemoaning the fact that in this life, at least, we will always be caught in tension between chronos and kairos. The late Ray Anderson put it this way: we are made of dust yet we have eternity in our hearts.

Making this movie that focuses so intently on the hours, you’d think the one thing I wouldn’t forget is time. The truth is, I not only forget the hours, I forget to pray them. That’s a short route to hypocrisy and to losing sight of the purpose of this ambitious project in the first place—which is to dive more deeply into the mystery of the place where time and prayer merge.

So, we have a modest plan. We have a small team that thinks about distribution and social media, as we hope that by the time we’re done with this project we’ll have our own delivery system for it. In those conversations, we’ve been considering the value of Twitter for slowly building an audience. We invited Eric Jessen and Matt Lumpkin to one of our producer meetings to give their opinions on the subject. Both said the same basic thing about the secret to Twitter: say something interesting.

Among us, we decided what would interest us would be a daily tweet at a specific hour of prayer with a reflection, scripture, or thought about the personality of that hour. To remind us that while we are making the movie Praying the Hours we ought to be praying the hours as well.

Starting on Monday, March 26, 2012, and for 30 days thereafter, we will tweet every day at 3 p.m. at the hour of None—the hour we finished shooting last week and are starting post production on. Follow us on @praythehours.

None is the hour of the day when “shadows lengthen.” There are only a few hours left to daylight and the heart sinks to consider it, knowing that you will not complete all that you hoped to in this day (it applies equally to a lifetime). This is the hour to pray for courage, to rise up and ask God to help you focus on something that has eternal value. It’s a good hour to admit your limitations and embrace grace. 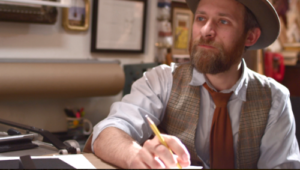