A Divine Cycle of Art and Prayer

Now that you’ve been given access to the movie Praying the Hours, one of these days—when you’re in the right mood—you’re going to watch it. And when you finally come to the end, several things will happen, among them, you’ll want to hear the music again. Lauren Meares’ achingly beautiful score was inspired by the movie, yes, but more significantly it introduced her to the vast oceanic inspiration of the Hours of prayer. It’s a cycle of divine imagination: art inspires prayer which inspires art. So, I’ve got some good news.

In the next few months, you’ll be able to get the whole score (two hours!) as it was composed, performed, and sung by Lauren Meares (more on that epic endeavor in a post to come).  When she and I were talking about making the music available, she mentioned her desire to break the score up according to the Hours and to have artwork for each of them. That’s when I remembered another occasion when this divine cycle inspired someone working on the film to create art. One of many great gifts given to the production by artist Lori Fox was a series of paintings that grew out of her contribution as one of our production design team members. Let me recall.

Long ago, our production design team worked on rudimentary mood boards for each Hour that we could provide to people making costume, set, design, and script decisions. I gathered a few people, including Lori, and described to them each of the Hours and their “personalities.” Together we built those boards—color palettes on the left, mood images on the right—to which production teams referred countless times over the years. As our resources were simple, the boards were also simple (i.e. cut and pasted the old fashioned way from outdated Pantone color guides and stock photography books), but they were invaluable for helping us create some coherence across the different Hours of the day. We shot the first Hour—Compline—at Christmastime, in Indiana. Lori joined me, Producer Tamara Johnston and Cinematographer Jordan McMahon as we went early to confirm locations, conform what we could to our Compline palette, allow the script to be informed by our surroundings, and prepare for a large crew and a month of wintery production. Nearly a decade later, those musings on Compline would continue to bear new art in the form of the upcoming Praying the Hours soundtrack. 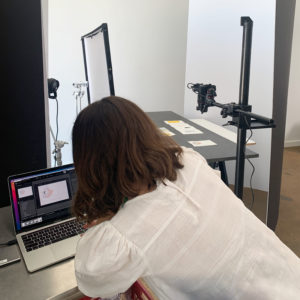 foxlor So great to be shooting with @kelseyfosterphotography some art work from 2012 that has been resurrected for a series of music albums based on the Divine Office or #prayingthehours // Back in 2010 I moved to Indiana for a month with a gaggle of other film makers and visionaries from L.A. During that time of wrangling wardrobe and extras, sorting through dailies, chasing hot air balloons to capture our aerial shots (pre-affordable-drones) and evenings at the rusty dog pub with pints by the railroad tracks, we all sorted out what the hour of #Compline looked like. When I moved to Austin in 2011 the film continued to be crafted by countless teams in various places. I wanted so desperately to still be a part so I painted a series of 8 paintings I mailed to the crew to keep us all connected. Now the film is complete and @lolomeares has woven her ethereal vocal chords into the project, carefully crafting 8 albums to walk the viewer through each hour. // While I am not Catholic, I am a seeker, and these Divine Hours gave so much hope to me during some seasons that felt unbearable. They offered me #kairostime in place of #chronostime they offered me a chance to see the depth of meaning in the mundane and the spirit of life within  death #yinyang I still carry this tradition in my heart today and am excited to invite you into the journey. To watch the film, host a viewing party, or contribute financially to its wider release, click the link in my bio. #burningheartproductions #divinehours #divinehoursprayer #conceptfilm 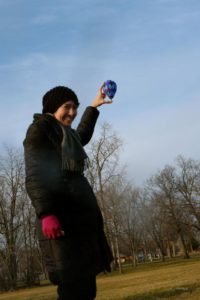 As she and producer Tamara Johnston chase the balloon on its journey, Lori Fox poses for the picture that begged to be taken.

This convergence of artists, all inspired by the same deep well of an ancient practice of prayer, continues to give us life and to spark new work elsewhere. Watch this space for information on when and how Lauren’s music and Lori’s watercolors will be available, but prepare for something really beautiful. Even after all these years, the production continues to be fecund, bearing fruit season after season. Thank you Lauren and Lori for your magnanimous gifts. I can’t wait to get this compilation myself and to see what new work their work inspires!—by Lauralee Farrer, director 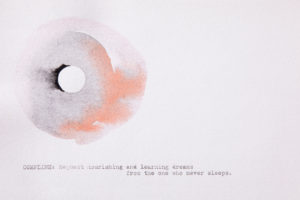 the Hour of Compline, as envisioned in a series of eight Hours of Prayer, by artist Lori Fox

*This Just In: Thank you Sue and Jane and Jim for your contributions to the release of Praying the Hours! These gifts are particularly moving, coming from friends old and new, and adding to the possibilities of the film finding all its unexpected audiences. (If you want to contribute to the ongoing costs of releasing Praying the Hours, you can do so here.)