Of Premieres and Purpose

It always seems that just when it’s most important to post, most interesting, there is least time for it. Blog posting for me, like journaling, is nearly always frustratingly anticipatory or reflective, losing the amazing energy of the “now” of filmmaking. Rather quietly, and without fanfare for the Burning Heart Productions team, the first fruit of our years-long effort premiered twice in a few weeks. 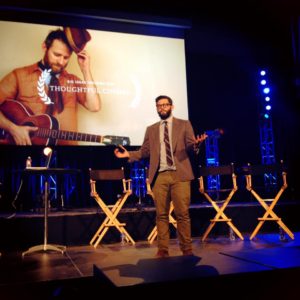 The first time, by invitation of Evan Rosa, for several thousand college students attending the Torrey Conference. It was the launch event for the Center for Christian Thought’s new series on Thoughtful Films. It was our privilege to be there, and to hear the rich and potent responses from panelists and tweeting audience members that night. 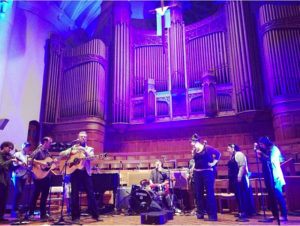 Then we had the singular privilege of producing the Inauguration Eve program for the new president of Fuller Seminary, Mark Labberton. Among many others, we shared that stage with our guests the Eagle Rock Gospel Singers and guest performers Aaron Paul Ballard, Patrick Duff, Cynthia Glass, Michael Fox, and Matt Tinken (seen here, at rehearsal).

That evening, when we showed “None: The Prayer of the Mournful Songwriter,” was a great privilege, and far more satisfying than had it been a more conventional film premiere.

There have been waves of responses from both events, that continue to sift into our email inboxes or onto our facebook timelines. Among my favorites is a reaction from Robert Johnston, professor of theology and culture at Fuller Seminary, whom I asked, “did you like the film?” He responded, “I don’t think I can respond to the word ‘like.’ I am still trying to figure out what you have done to me.” We received many emails, delving deeply into the subjects and emotions stirred, many saying that conversations are still going on about it, and many who articulated our dream response—“that story was my story.”

Among the latter was friend Matt Lumpkin, who, among other things, said the experience made him reflect on a poem he’d written recently. I include it here, with his kind permission, in the anticipation that talk about these themes of time, lament, hope and praying the hours, will continue.

Their fierce struggle to etch the suffering of this day
into the dark stone face of the universe.

The spirit of their little lives,
a melody made of a thousand shrieks of joy and terror
A billion first breaths and a billion last deaths
The rests between notes.

I see that to make my mark is nothing.
I must join my mark to the line.